Right from the first time we picked up a set of dumbbells, we were told and reminded time and time again that cardio is a vital part of training that must be routinely performed conventionally on cardio machines to burn fat and build lean muscle. Treadmills, ellipticals and stationary bikes have become staples for cardio training in commercial gyms. It isn’t unusual to see people run on the treadmill for over an hour! I’m about to tell you why doing that much cardio could be a complete waste of time.

For the majority of us (competitive seasoned runners excluded), we do cardio to burn fat and improve endurance. Our bodies produce fuel via 3 energy systems: the ATP-CP (activities lasting 10-15 seconds), Anaerobic (activities lasting 10 seconds to 2 minutes) and Aerobic (activities lasting longer than 2 minutes) energy systems. All 3 systems are utilized in our daily physical activities. The aerobic and anaerobic systems uses the body’s stored fuels (glucose, glycogen and fat) when we perform steady-state cardio sessions lasting anywhere from 15 to 45 or more minutes and yields a ton of burned fat calories. An average 130-pound person can burn up to 250 calories of fat running on the treadmill at 6 miles per hour.

Well, what if I told you that you could burn more calories in a much shorter amount of time? Recent studies have endorsed High Intensity Interval Training (HIIT) as the most effective cardio method to burn fat. Simply put, HIIT is defined as alternating short bouts of high intensity activities with moderate-to-long bouts of very low intensity recovery periods. An example would be to run at your fastest speed on the treadmill for 30 seconds to 1 minute followed immediately by a slow, mild walk for 90 seconds to 2 minutes. That process would be repeated 6 to 8 times. HIIT has also been associated with increased EPOC (Excess Post-Exercise Oxygen Consumption) in which the body stays in a fat-burning metabolic zone for 24 to 48 hours afterwards!

HIIT can also be performed with traditional exercises like kettlebell swings, clean & press, burpees and squat jumps. Just like the name, it can be quite intense especially if you’re a first-timer so don’t be discouraged if you struggle initially. Due to its taxing nature, HIIT should not be performed no more than twice a week with at least 48 hours apart. Do not perform HIIT if you have a preexisting heart, chronic and/or cardiovascular condition. Always check with your doctor first.

Before you’re quick to curse back at me, calm down for a second. I did not make that up. That is the new catchy phrase that has been making it’s way around fitness circles in quite some time now. In fact you may have seen it on t-shirts and on social media. But what exactly does it mean? Well I’m about to tell you it isn’t what you think it is.

Would you believe me if I told you that you once squatted everyday for a number of years? 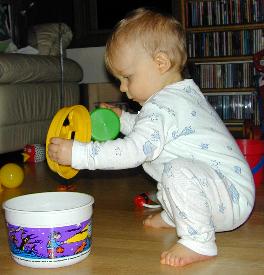 See, I told you! As toddlers, thanks to the spry flexibility in our hips, we could virtually stay in a squat stance for hours! (I’m curious to know how long I can last in this deep-squatted stance). This is one of the reasons babies can play and stay active for hours and not get tired. The ability to rely on those ‘squat muscles’ enables them to stay on their feet and move for a long time.

The squat is arguably the most important and effective physical movement known to mankind. There are over 600 muscles in the human body and the squat alone is known to work half of them! Several case studies and science-based theories support and conclude that the squat is the most vital exercise for fat loss, muscle gain and building raw strength. I learned early in my lifting days that I needed to squat frequently if I wanted to be achieve all my fitness goals.

So how exactly is a squat supposed to be performed? 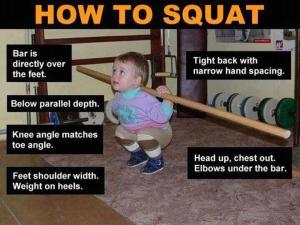 Although many variations of the squat exists, the traditional barbell squat (pictured above) remains the most common and the one to yield the most dividends.The baby in the picture demonstrates the exercise as simple as possible (I’m still amazed how this brave toddler was taught to do this. Kudos to the parents and/or whoever the coach was).

Due to many media publicized images of injuries, several trepidations inevitably come within the territory of barbell squats and have caused many people to avoid it. The fact of the matter is we can get hurt even just walking up the stairs or stepping down from a curb. Safety and injury prevention are essential parts of staying fit for a long time and can be achieved through proper warm-up, a sound training program and adequate diet and supplementation.

Moral of this post: Embrace squats and do them frequently. A tree with weak roots will ultimately collapse!

I’m curious to hear your feedback. How often do you incorporate squats into your training programs? 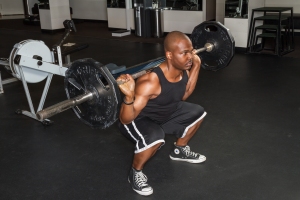 Error: Twitter did not respond. Please wait a few minutes and refresh this page.

Get Fit Or Die Trying

Get Fit Or Die Trying